You’ve read the books, the articles, the endless stream of sales advice from the internet.

You’ve read masterpieces like Influence by Robert Cialdini or Persuasion by James Borg.

Those resources all have wonderful advice — advice that you’ve applied over your real estate career. And that advice has probably even made you a better salesperson — you know just the right things to say and when to say them. Heck, our own sales training at Call Porter is largely based on the brilliant concepts from How to Win Friends and Influence People.

The problem is, reading too many of those books can unintentionally make you into a soul-less psychological analyzer who constantly tries to figure out why someone didn’t convert and how you can make them convert with your sales voodoo.

(I’ve fallen into that trap myself)

And if there’s one thing that turns off prospective clients, it’s a salesperson… who’s too salesy.

Still, you have to close deals.

So how do you sell without trying to SELL (if ya know what I’m sayin’)?

Want to delegate your inbound call answering? Call Porter can help (try us out for free by clicking here!)

Most salespeople kinda stink at sales…

How does HE know that most salespeople are no good??

And the answer is… I don’t. I had a gut feeling, and good ol’ research and statistics gave me the rest of what I needed to make that claim: a measly 18% of buyers trust and respect salespeople.

But that’s not a big surprise, right?

We’ve all visited a car lot, trying desperately to avoid the salesperson exiting their den.

We’ve all left a clothing store because the weirdo-salespeople wouldn’t stop following us around like a lost puppy.

Worst of all, we’ve all uncomfortably bought something we didn’t want to buy because of a salesperson’s manipulation.

The point is, salespeople have a bad wrap. And it ain’t for no reason.

Salespeople get a bad wrap because they’re often pushy, deceptive, and even outright manipulative. And in real estate, the truth is no different.

We’re a consumerist society that loves to buy and sell things, but we don’t generally love desperate people trying to sell us those things.

Is it because sales as an industry is outdated?

No. Of course not.

It’s because most sales people forget one simple, critical truth.

The truth about good sales… and dirty salespeople…

The truth is, good salesmanship is all about the relationship with the customer or prospect.

I once bought a car from a salesperson and you know what? He still calls me once every six months to see how I’m doing. He spends about 5 minutes being authentically interested in me and who I am and then he has a quick “if you know anyone who needs a car, let me know!” at the end of our conversation.

And if I do need a car in the future, I’m going to buy from him. Not because he offers the best deal or because his cars are somehow superior to the competition down the street, but because I know him, I like him, and I want to see him succeed.

Thus is the power of authentic relationship.

Of course, every healthy relationship requires honesty. Which is exactly why dishonest and manipulative salespeople perform so poorly in today’s world — they aren’t, can’t, build a relationship with their prospects.

The average person sees somewhere around 5,000 ads per day, every day.

This means that we’re all used to ads, pitches, and salespeople trying to finagle us into buying some shiny new product. We’ve seen it all. And no one is impressed with it anymore.

Now people are impressed with a salesperson who’s honest, confident (i.e. not desperate), and transparent about whether or not the prospect is a fit for their product — and nothing less.

Because today, that is unusual, attractive, and enticing.

But will focusing on the relationship really help you close more deals?

We think so. And we’ve hedged out bets on it.

Why you’re going to close more deals this way…

At Call Porter company, we believe (zealously) that dishonest marketing isn’t just unethical and frustrating, but it’s bad for business. It’s bad for sales, team moral, and even your conversion rate.

But what’s the alternative to pushy selling?

It’s actually quite simple: have a great product that does what you say it’s going to do and then find people who need that product. Do that and you’ll have an easier time closing deals than you ever have before. 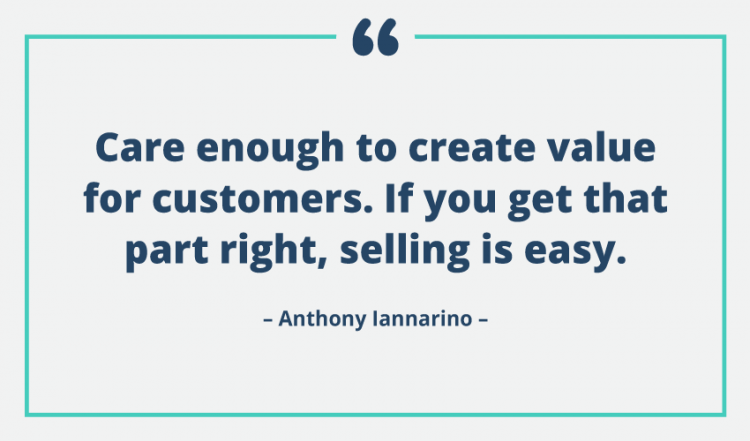 Sure, leveraging the latest psychological tricks can still be helpful to push an ideal prospect over the edge (urgency and FOMO, for instance). But the real trick to sales is to let your product or service do the marketing for you.

Figure out what your ideal market wants and then offer them exactly that. Do the best job you can with it.

If you do, you’ll have referrals knocking at your door day and night wanting to work with you, you’ll build a healthy and sustainable reputation in the communities where you operate, and you’ll become known as the go-to person for all things real estate.

But more importantly, you’ll build a reputation for being honest, helpful, and easy to work with — a far better long term sales strategy, don’t you think?

Want to delegate your inbound call answering? Call Porter can help (try us out for free by clicking here!)

Prev8 REI Sales Phrases That Will Help You Close More Deals, Faster
How to Grow a Thriving Real Estate Business in a Highly Competitive MarketNext